They are calling for over 100 degrees this week but I will be up in the mountains. I don’t want to rush out of Portland first thing Sunday morning so this will be my shortest driving day. It is my first visit to Washington state and I am getting set-up for the long haul to Glacier National Park on Monday. I’m headed north though it would be faster to drive straight northeast to Spokane. I’m a tourist. I want to see Seattle, Mt. Rainer, and the Wenatchee National Forest.

I am warned about how bad the traffic can get along this stretch of I-5. As I approach Olympia, there is a radio notice about a traffic jam and I see on my GPS that yes indeed there an is hour delay. I abandon my plan to visit Seattle and pull off the interstate at the next exit without any idea where I am going. If it’s going to take forever, I’d rather take the long way through the backroads of Washington.

I expect more forest but end up going through farmland that looks a lot like the mid-west, except for Mt. Rainer looming in the distance. I arrived in Yelm, WA just as the UFO Fest was letting out. So much for avoiding traffic jams. So much to taking Highway 2 through the mountains. I ate dinner at Twede’s Café in North Bend, WA and jumped back on the interstate. If I had not had reservations at a bed & breakfast in Leavenworth, I would have just made up time and pulled over at some random hotel along the route.

I get in at 9pm Sunday night and sit on the lawn of the B&B. There are shooting stars in the wide-open night sky, the Perseids meteor shower, mountains in darkness to the west, frogs chirping in the pond, and a horse resting in its pen. It is at these moments that I miss having a traveling companion.

On Monday, I see more people broken down by the side of the road then I have seen the whole trip. The heat of eastern Washington is unforgiving. I am grateful that my car is a low-mileage 2013 though there have been moments I thought I might have to get out and push it up the side of the mountains. Turning the A/C on and off to lessen the drag on the engine wore thin but I was grateful to have it when I could. 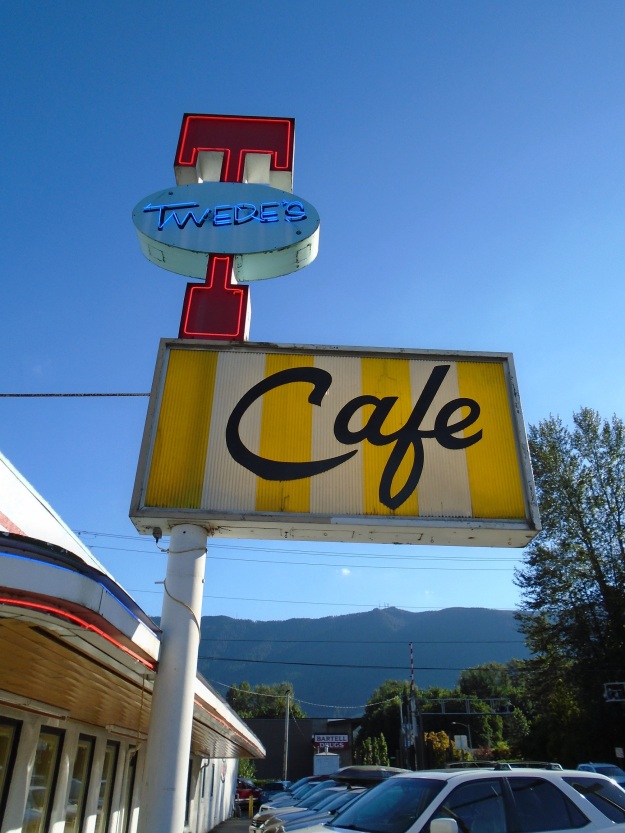 How could I resist making a pilgrimage to the “Double R Diner”? For all you Twin Peaks fans, North Bend, WA is home to Twede’s Café, the location used as the model for the diner in the TV show. I ordered breakfast and black coffee- but resisted the cherry pie. According to Wikipedia, arson gutted Twede’s Cafe in July 2000. The interior was destroyed, while the exterior neon sign and the structure remained. When Twede’s Cafe reopened in 2001, it had a new interior that looked nothing like the Double R Diner. As part of the production of the 2017 season of Twin Peaks, the series production company restored the interior of Twede’s Cafe to the original Double R Diner interior.

Leavenworth, WA is about an hour off of I-90 but so worth the trip. A cute little mountain town modeled after a Bavarian village, I was not able to spend as much time as I wanted here. I can imagine a weekend trip around the holidays for some romance. According to Wikipedia, it was a small timber community that became the headquarters of the Great North Railroad in the early 1900s. When the railroad relocated, the town struggled until it was redeveloped as a theme town focused on tourism. It is home to the Leavenworth Nutcracker Museum which contains more than 5,000 nutcrackers dating from prehistoric to modern times. 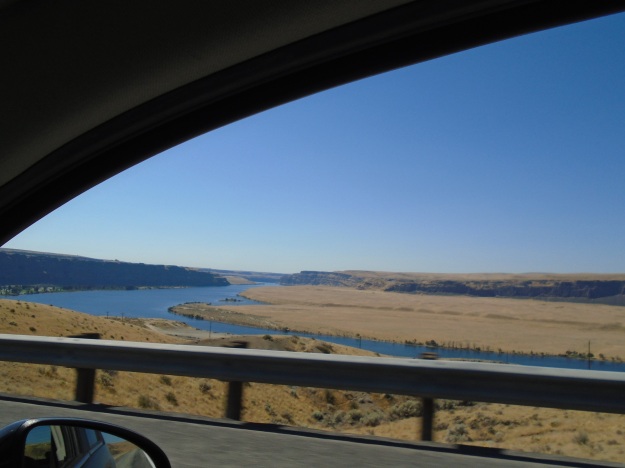 According to Wikipedia, eastern Washington has roughly twice the land area and one-third the population of western Washington and is in the rainshadow of the Cascade Mountains causing a dry climate similar to eastern Oregon. Along I-90 you will cross over Moses Lake, which has over 120 miles of shoreline. Before it was dammed in the early 1900s and then incorporated into the Columbia Basin Project, Moses Lake was a smaller, salty, shallow lake. To the south is the Potholes Reservoir and the Columbia National Wildlife Refuge that has vast amounts of migratory birds and other fauna natural to the area.

The panhandle of Idaho is covered in forests and is isolated from southern Idaho due to the mountain ranges that naturally separate the state. According to Wikipedia, the Coeur d’Alene National Forest is one of three forests aggregated into the Idaho Panhandle National Forest. The city of Coeur d’Alene is named after a federally recognized tribe of Native Americans who lived along the rivers and lakes of the region. They were first encountered by French fur traders in the late 18th century, who referred to them as Cœur d’Alêne, meaning “heart of an awl”, reflecting their experience of the tribal traders as tough businessmen.

The Lolo National Forest nearly derailed my getting to Glacier National Park on time. The scenery around every bend of this forest was so breathtaking to I had to force myself not to stop at every pullover to take pictures. According to Wikipedia, the forest spans 2 million acres and includes four wilderness areas. In total, 1,500 plant species exist in the forest as well as 60 species of mammals, 20 varieties of fish and 300 species of birds. Large mammals include the grizzly, black bear, cougar, timber wolf, mountain goat, bighorn sheep, elk, moose and mule deer. Both the bald and golden eagle reside in the forest along with trumpeter swan, herons and 30 varieties of ducks.

Flathead lake is another one of those places that just opens up suddenly before you. I can imagine taking a long romantic weekend here to get lost and forget about the world for a while. According to Wikipedia, it is the largest natural freshwater lake west of the Mississippi River. The lake is a remnant of the ancient, massive glacial dammed lake, Lake Missoula. It is deeper than the average depths of the Yellow Sea or the Persian Gulf and is one of the cleanest lakes in the populated world for its size and type. Once known as “Salish Lake”, this body of water takes its name from the Salish (Flathead) Indians who live at the southern end of the lake on the Flathead Indian Reservation. Kerr Dam regulates the lake’s water level and provides hydroelectric power and water for irrigation. The lake is inhabited by native trout and the Flathead Lake Monster. 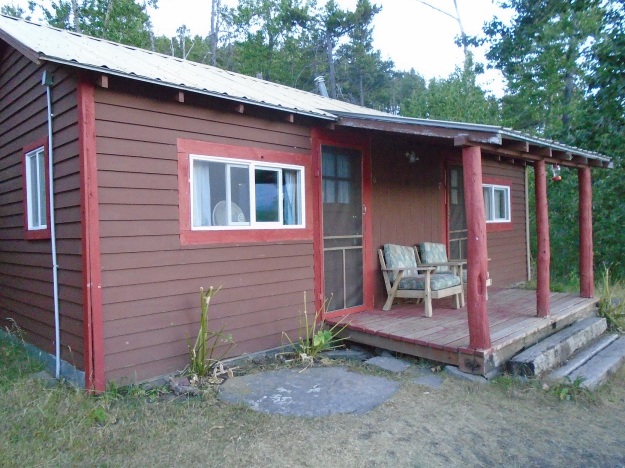 I stayed at a ranch on the Blackfeet Indian Reservation two miles from Glacier Park Lodge where my niece Laura and her husband Sefa work. I hear the trains go by and the cabin I am in is a workers’ cabin for the men who built the railroad. The trains are very loud affairs, filling the whole valley with noise, connecting the east to the west, the rural towns to the cities.

The cabin has no A/C or TV (no problem!) but a fridge, private shower, a bed, and a hungry mouse. There are blue curtains with little flowers, mismatched furniture, an extra blanket, and a desk with a bench that I am writing this entry on. I am here in Glacier National Park for three days to hike in the mountains and visit with my family.

What a long strange trip it’s been. Time to clear the mind, clear the soul, and settle within myself.