I spent the night in Albion, Idaho. There are signs pointing to this town on the interstate. It’s population: 297. What a perspective. Idaho feels so sparse and remote. I feel a bit vulnerable here out on the western frontier, 500 miles from anyone I know. I am at the mercy of the kindness of strangers.

I sit at an antique writing desk, preparing for what’s next: pack up, eat my breakfast, gas up in Declo, hit the road to Boise then on to Portland, Oregon- my destination. I am on this trip to spend time with my friend Steve and meet his wife Ramona. It’s been seventeen years since I last saw him.

I have terrible heat rash on my arms and neck. Living in Minnesota has made me much more sensitive to the sun and heat. South Dakota and Utah did me in. The blazing heat and intensity of the sun in Salt Lake City was too much.

My innkeeper is a kind stranger. He runs the local bakery out of his inn and cooks me a generous breakfast. He is eclectic, intelligent, and has a vision for his inn to also house a mother focused daycare/ spa. He met his Dutch wife at a Tibetan monastery in his 40’s. I got to meet her and their two beautiful children. He gave me a loaf of bread and a plum for the road and warned me that Declo was a speed trap for out of state license plates.

I stayed in Oregon for five days. I drove highway 77 north out of Albion, ID to I-84 west to Portland, OR. Here are some highlights of my visit: 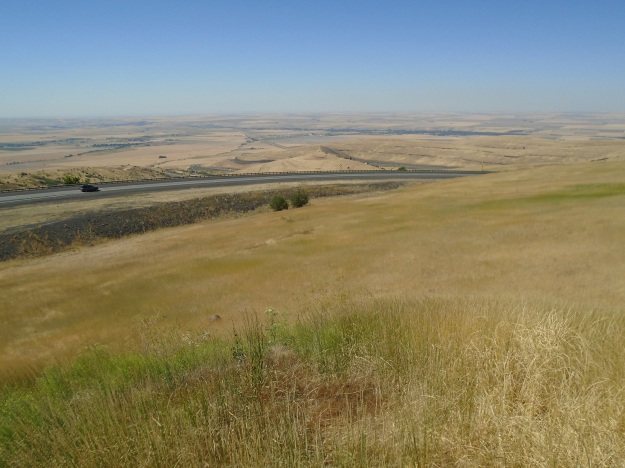 There are a number of wonderful overlooks along the interstate and I stopped at every single one of them. Deadman Pass Lookout on I-84 east of Pendleton provides a fantastic view of the high desert of Eastern Oregon. According to Wikipedia, I-84 climbs Emigrant Hill, a 6% grade, into the Blue Mountains. This grade is known for the fact that the westbound lanes switchback twice on descent into Pendleton. Eastbound lanes feature the tightest curves allowed on the Interstate Highway system. This grade is also well known because of the distance between eastbound and westbound lanes, nearly 2 miles at some points. 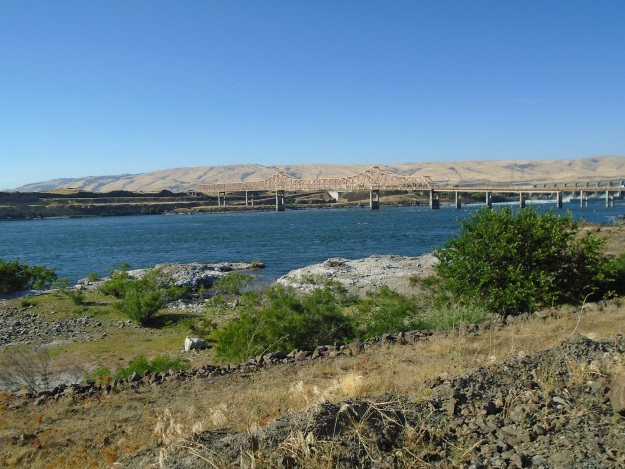 I stop for dinner at Jim’s Drive-in near Dalles Dam in Dalles, OR. I am only an hour from Portland but Steve warned me to avoid rush-hour. There are pelicans by the dam and it is 100 degrees outside. I am grateful for the cheeseburger, ice cream, and air conditioning. People thought I was strange due to my habit of making faces when I write and the itching of my heat rash. Sorry folks, I’m not from here.

According to Wikipedia, work began on the dam in 1952 and completed five years later. Slackwater created by the dam submerged Celilo Falls, the economic and cultural hub of Native Americans in the region and the oldest continuously inhabited settlement in North America. On March 10, 1957, hundreds of observers looked on as the rising waters rapidly silenced the falls, submerged fishing platforms, and consumed the village of Celilo. Approximately 40 ancient petroglyph panels were removed with jackhammers before inundation and were placed in storage before being installed in Columbia Hills State Park in the 2000s

I am sad to report that the gorge caught on fire in early September due to irresponsible use of fireworks. NPR reports that the fire closed 40 miles of road and threatened homes. It ignited along a popular hiking trail which stranded more than 140 hikers in the Columbia River Gorge National Scenic Area and led to a harrowing fight for survival and eventual rescue.

On July 27, Steve drove me out through the forest to the coast, to sit on the beach, look at the Pacific Ocean, drink beer, and talk all day. The morning fog was still hanging on the mountains. You can drive your car on the beach here and hardly anyone else is out there- weekday benefits! We might have seen a whale blow and maybe its black back but got no confirmation. Seagulls and sandpipers searched for food, a large log washed ashore as well as half a jellyfish and a tiny crab, the sea salt whipped our faces and covered the car. We ate burritos and popcorn and beer. It was very relaxing and fun and exhausting. How can sitting in a chair by the ocean listening to music all day be so tiring?

On July 28, I got to visit Powell’s books, a Portland institution. According to Wikipedia, Powell’s claims to be the largest independent new and used bookstore in the world and I believe it. When I came to Portland for the first time in 2010 on a business trip, I got to visit Powell’s City of Books and get my picture superimposed over the marquee. It claimed I was a NY Times Bestseller. This time I haunted the Hawthorne District location, spending way too much money on books as expected. I did some window-shopping at the other small businesses and artist spaces along the street. There is plenty of great people watching from the coffee shop window.

I drove around town and did the tourist thing. According to Wikipedia, approximately 2,424,955 people live in the Portland metropolitan area and the traffic supports that statistic. Named after Portland, Maine, the Oregon settlement began to be populated in the 1830s near the end of the Oregon Trail. At the turn of the 20th century, the city had a reputation as one of the most dangerous port cities in the world, a hub for organized crime and racketeering. After the city’s economy experienced an industrial boom during World War II, its hard-edged reputation began to dissipate. Beginning in the 1960s, Portland became noted for its growing liberal political values, and the city has earned a reputation as a bastion of counterculture, which proceeded into the 21st century.

In addition to sightseeing, I was able to meet up with my copyeditor Jim who helped me with Todd’s book, Popcorn from the Void. He lives in the area and since we had worked together on this project, I wanted to meet him, shake his hand, and thank him in person. Hopefully I will send him some books of my own in the future.

Visiting Portland was such a great experience. Steve is as he always was- sweet, smart, funny. He is older and wiser and still a stand-up righteous dude. Ramona his wife is great and we fell in like old friends. She is sweet, funny, hardworking, creative, passionate, and beautiful. And they are so much in love. What a great couple. They live in this beautiful city where you can see Mt. Hood just driving around the neighborhoods. Forest, city, ocean, mountains all together in one amazing place. I am so grateful I got to visit them.